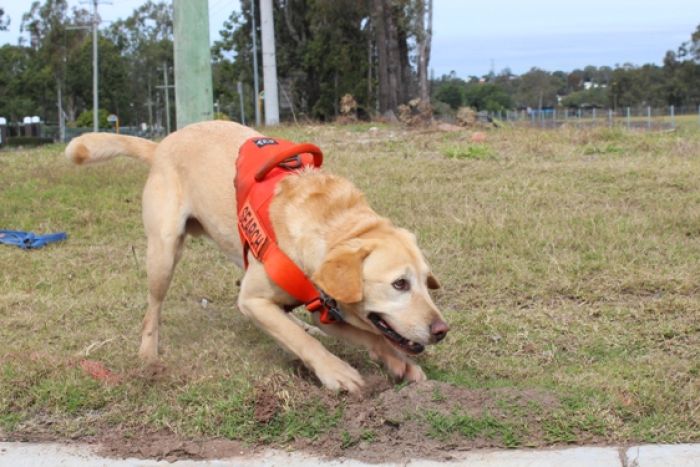 Imagine you looked outside and saw this in your yard.

The technician sent by the company you hired to repair your sprinkler system is tearing off his clothes and jumping around your back yard in his underwear.

One of our esteemed Blue Sky Rain irrigation service technicians was working on a job site and all of a sudden was stung in about 25 places from his legs to his back by something under his clothes.  It was a sharp painful and continuous stinging in many places on his body, so he did what anybody would do, he stripped down to his underwear and jumped around the yard violently brushing the vicious fire ants off of his skin.

The customer saw this going on in her yard and told him not to worry, she is a retired nurse.  She gave him a pair of her husband’s shorts to wear while she washed his clothes.  What a wonderful thing to say and do.

We were so happy that he had her help that we didn’t charge extra for the show.

The Blue Sky Rain Sprinkler technician quickly reported this to the service manager who quickly contacted me in on what was going on.  I help monitor the progress of each day and customer expectations, so he knew I needed to know why this service call was taking longer than planned.  My reaction was, thank goodness he was at that house.  He was lucky enough to have his misfortunate battle with fire ants at a long-time customer’s home who has always been wonderful to us.

Our last encounter with fire ants was working for a Homeowners Association that lost most of their landscape lights to the destructive pests.  We see them in landscape lights from time to time, but this was the worst case we had seen.

We did a little research on fire ants and thought you might like to know what we learned.

These pests are not native to the United States but were accidentally imported from South America in 1918 and introduced first in Mobile, Alabama.  Not too far away from home!

Fire ants are a growing problem in the southern United States.  It’s thought that they reside in 15 states in the US.

But did you know this about fire ants?

When fire ants crawl up your pant leg, they release a pheromone that signals other fire ants to move in.  Then they release it again to signal an attack.  That’s why it seems like they sting all at the same time, because it is somewhat an orchestrated simultaneous bite.  They also anchor themselves and bite repeatedly.

Ever heard of a Fire Ant sniffing dog?

An eradication initiative called Biosecurity Queensland, in Brisbane the capital of Australia, includes locating fire ant nests using the assistance of trained dogs.  Each nest is injected with poison and the ants are tested genetically to attempt to determine their origin.  Residents and business-owners nearby are urged to check their property periodically.  We urge you to do the same here in Birmingham, Alabama.

They take their fire ants very seriously down-under and we should too.

The Blue Sky Rain guy with his great sense of humor and love of working outside sent a text to the office that said, “I guess I shouldn’t have stood in the fire ant bed, huh?”  When he arrived back at the office, he told the service manager that as bad as it was, the poison ivy was much worse.

Yes, unfortunately, the month prior this poor guy experienced another skin irritant, only this one from the plant kingdom, poison ivy.  And he’s not the only one.  Our service manager himself, who has not had a brush with it in the 14 years at Blue Sky Rain also came down with a rash that kept him up at night and drove him nearly crazy for three weeks.  Of the three technicians who worked at this particular job site, two were infected and one lucky guy went unscathed.

It’s about 85% of the population who are allergic to poison ivy and 15% are extremely allergic.  I am in the more unfortunate bunch who end up bedridden for a month when exposed.

It’s important to wash with soap and water immediately when you encounter poison ivy.  It’s the oil in the poison ivy, urushiol, that causes the allergic reaction.  Don’t jump in the shower and start washing all over until you’ve washed the infected areas, which are normally hands, arms, feet or legs.  Otherwise you risk spreading it to uninfected parts of your body.  We also washed the tools that were used on that customer’s job site to remove the poison ivy oil, which can linger for one to five years.

When we see poison ivy on a job site, we request that it is sprayed or removed prior to our work beginning.  Somehow we missed our protocol this time.

The most important thing you as a property owner need to know is what it looks like and how to get rid of it immediately. 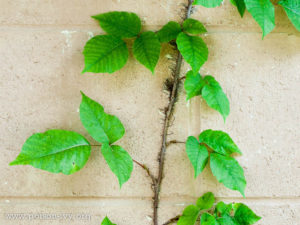 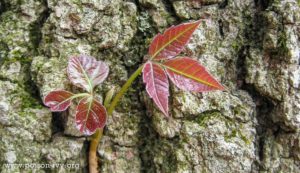 Some Poison Ivy is very difficult to identify, because it can take on different appearances that can fool even an expert.

Most people run to Home Depot and purchase a spray and kill it that way.

There are also organic methods that involve removing the plants by digging them up and not using any chemicals.  Cindy Campbell is a poison ivy removal expert who uses organic methods.

Poison ivy in its natural state has a root system that grows parallel to the ground about an inch deep.  Ripping poison ivy at the root will cause its roots to bush out under ground and grow multiple vines above ground.  The roots grow straight down and can reach two feet.  Cindy says digging up 8 inches is normally adequate, because beyond 8 inches deep the roots are much thinner and won’t survive.

Why trim poison ivy?  What?

Help Me Help You BlueSkyRain.com

Keeping your property free of poison ivy will ensure the health of your family, pets and visitors, oh, and your sprinkler repair folks at Blue Sky Rain.